To say I am proud of my sister-in-law Jenn Bonner would be an understatement. Her weight loss journey, where she went from over 300 pounds to 140 pounds without surgery, has been featured in the May 2012 issue of O Magazine as well as The Insider. 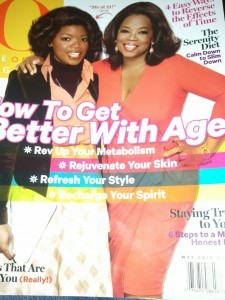 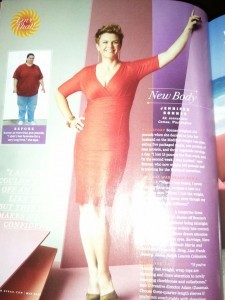 Jenn’s weightloss began when she decided to join her husband Trey Bonner on the Medifast program he was on. Here’s what she told O Magazine about her first week on the plan: “I lost 13 pounds the first week, and by the second week I was hooked.”

Jenn also just returned home from Los Angeles where she taped a segment for The Insider. Watch her episode below. Her segment beings at the 9:30 mark.

I’ve known Jenn for over ten years when I first met her while up in Washington visiting my husband’s family. Her personality and bright blue eyes draw you in immediately. She’s witty, hilarious, and just a lot of fun to be around. Watching her transformation and seeing a “glow” I’ve never seen in her before makes me want to cry. She is an inspiration and she has a passion for helping and guiding people to transform their own lives. Healthy living and a life full of joy is what it’s all about.

You can read more about the program Jenn and her husband Trey are on at their website www.halfthecouple.com. Great name for a website isn’t it? And if you would like me to connect you with her and make an introduction, shoot me an email at julieabonner@gmail.com.